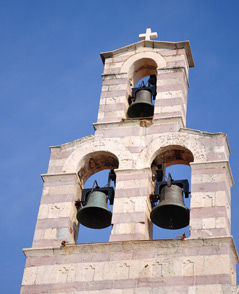 The use of wedding bells has been a long standing tradition world wide for many centuries, but the origins date all the way back to Celtic origins. It is said that, not only in Celtic but many other cultures as well, they were used to keep evil spirits away that might cause harm or negativity on the wedding day. Therefore, ringing of the wedding bells, and making loud noises was thought to bestow good luck upon the bride and groom. In Scotland, and most other cultures, bells were also used to announce to the entire town that a wedding had just taken place. They were traditionally rung as the newly married, happy couple were leaving the church.

Today, in Ireland, wedding bells still play a very large role in wedding ceremonies. Brides and grooms are even given a marriage bell as a gift, and it must be placed within a central part of the home. What's even more interesting is that the bell can be used throughout the couple's years of marriage to bring an end to an argument without either partner having to admit that they are wrong!

Since cars do not date as far back as wedding bell traditions, the origins are somewhat newer than most traditions, but interestingly hold very similar beliefs. Car horns and making loud noises were also used to ward off evil spirits; however, honking the horn was often done on behalf of the bride as she rode to the ceremony, not away from it with the groom.

Why Bridesmaids Are Dressed Alike Why Is It Called A Honeymoon?